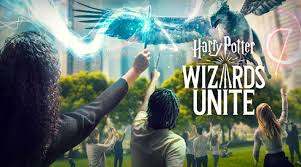 For Harry Potter fans around the world, the time has come. The Statute of Secrecy Taskforce has called on witches and wizards everywhere to save the wizarding world from ‘the Calamity’, by playing Harry Potter: Wizards Unite.

The new game by Niantic (makers of Pokémon Go) officially launched on 21 June, but—thanks to a dose of Felix Felicis—has been available to Australians and New Zealanders ­since early May. As the beta testers, aka the guinea pigs of the game, we enthusiastically accepted the challenge, muddling our way along and providing invaluable feedback to the developers.

After two months of solid playing, I’m pleased to report that the game is still fun. A quick overview for those who haven’t tried it yet—the aim of the game is to find traces of magic, rescue foundables from confoundables, and solve the mystery of the Calamity.

Using your phone, you move around a map of real-life landmarks, replenishing your energy at inns (which feature food and drinks such as butterbeer, pumpkin juice, and Bertie Botts Every Flavour Beans). Traces will show up as symbols on the map, ranging from Dark Arts to Magizoology, Legends of Hogwarts, and more. When you tap on a trace, you’ll need to cast a spell to rescue the foundable—this could be anything from a baby niffler to Peeves the Poltergeist. Potions are also a must in the game—brewed using ingredients found on the map or grown in greenhouses, these can help you catch difficult foundables, earn extra XP, and also win challenges in fortresses.

Fortresses are a fun team activity, allowing up to five players to band together and fight foes such as pixies, death eaters, and acromantula. This is where professions—aurors, magizoologists and professors—come into play, as each one brings different skills and strengths. Some of my colleagues and I have a formed a little group at work and venture out at lunchtimes to battle. We’re a mix of professions and have now figured out how to best combine our abilities to win, although sometimes it’s a pretty close call! (we won one challenge last week with less than 15 seconds to spare)

A recent change to the game has been the ability to add friends. At this stage the main benefit of doing so is extra rewards when you battle in fortresses together; I’m hoping in future the opportunity to exchange gifts and trade items will be incorporated.

One of the best features of the game is the portkeys. Found in boxes (known as portmanteaus), you have to unlock the box with a key then walk a certain distance to open it (like a Pokémon Go egg). When your portkey is ready to use, you have to place it on the ground and step into the destination it opens. To date, destinations include Hagrid’s Hut, Borgin and Burkes, Ollivander’s, and the Forbidden Forest.

Overall, the gameplay and challenges are well thought-out and the graphics are outstanding, accompanied by some amusing sound effects depending on the spells cast. New features, foundables, and events seem like they will be added regularly, which will be crucial for keeping people interested. I’m looking forward to seeing what these are, continuing to team up with my friends to battle, and solving the mystery!