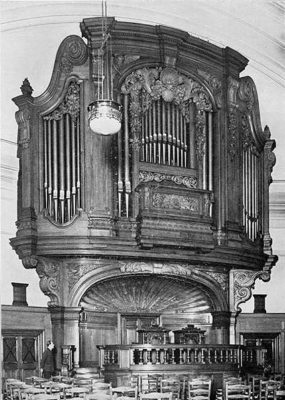 Actually, it’s not really an organ: it’s an organ case. The organ it housed was decommissioned years ago.

So, why are we writing about it? Well, it’s cool, it’s old and it’s the centrepiece of The Abbey which is where The Great Wizard’s Ball will be held this Saturday.

The magnificent carved oak organ case is around 100 years old and said to be carved from 800-1000 year old oak timbers retrieved from shipwrecks and old manor houses.  Until 1988 it stood in the Third Church of Christ, Scientist, in London. When the organ was decommissioned, the case was bought by a group of Australians.

Why, you ask? It’s a good question. Perhaps they pulled up in their beat-up VW Combie (owned by at least 15 previous Aussie backpacking consortiums) outside said church to check out this scientist dude, saw the “For Sale” sign on the impressive organ case and, in a hangover fog, thought “Why not?”*. Must have been one dodgy salesman.

It must have been a bugger to ship back to Australia and would have foiled their plans to wander around Europe for the next six months. At any rate, that’s exactly what they did and, in the cold light of a bright Australian day, realised their mistake and donated it to the Woodoak Museum in Junee in 1988.

There it stayed until 1995 when it was moved to Gold Creek. We’re told The Abbey was built to house the historic organ case and possibly built around it which would make getting it out a bit of a challenge – possibly a ploy to prevent that scientist dude from turning up one day demanding its return!

*With apologies to Messrs Robinson and Anderson and Ms Anderson who probably weren’t hungover at all!

Don’t have tickets to The Great Wizard’s Ball yet? Don’t Potter about. Book online before they sell out!