FREE SHIPPING Australia-wide on all orders over $100! *Bulky and oversize items may incur additional shipping fees. Contactless Click & Collect at both our Canberra and Sydney stores - limited hours. Dismiss 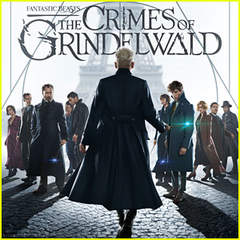 Accio the popcorn because The Crimes of Grindelwald is coming to Netflix this month.

All set for its Australian Netflix debut on Friday 13th September, the flick is the second instalment in the Harry Potter spin-off series Fantastic Beasts.

The film received mixed reviews from critics and fans alike but Quizzic Alley followers seemed to like it.

Commenting on Facebook, Fiona thought it was quite compelling: “Just saw it a few hours ago. I liked it. I like those hints of names etc from the HP books popping up all the time….Grindelwald’s rally – taken very much from recent history and just as powerful/unnerving. Loved the critters!!!”

And Kimberly was really excited about sharing the experience with the next generation: “I just loved it. Most of all… I loved watching it with my kids. I remembered the excitement I felt going to watch the Harry Potter films and now, I get to share that excitement with them all over again.”

Quizzic Alley team member, Oscar (AKA Professor Moonshadow) saw the movie when it was first released. He said he will be inviting friends over to watch it a second time with the full Harry Potter literary collection at hand so they can “discuss potential plot inaccuracies in real time”.

Will you be watching?