Have you seen the photos of J.K. Rowling’s childhood home?

It’s a Gothic-style stone one-and-a-half-storey cottage, in the sleepy Gloucestershire village of Tutshill near Chepstow. It is surrounded by lovely, green, manicured cottage gardens and features things like stone windows, vaulted ceilings and an understairs cupboard.

Right next door is the Gothic-style St Luke’s Church and the famous Chepstow Castle is up the road. It is the oldest surviving post-Roman stone fortification in Britain. Can you imagine Rowling and her younger sister wadnering along the banks of the River Wye telling stories insired by the castle? 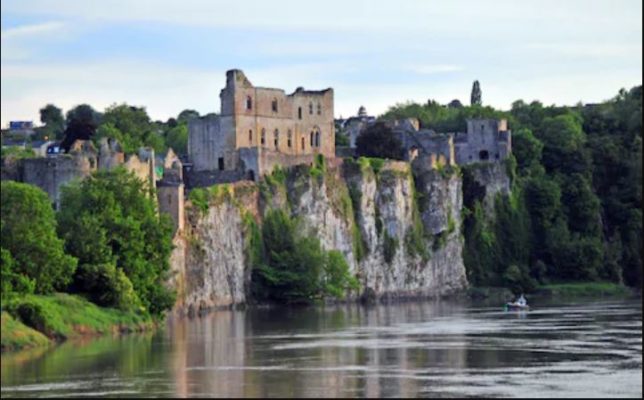 The village sits on the edge of the ancient Forest of Dean, surely the source of inspiration for the forest scenes in the final books of the Harry Potter series.

Rowling’s parents and their two daughters moved to Tutshill and into the delightfully named Church Cottage in 1974 when she was nine years old and she lived there until she was 18. Her father Peter eventually sold the house some 12 years later.

It seems the perfect location to inspire a little girl who would grow up to write the best-selling book series in history: a story about a boy wizard who attends the magical Hogwarts School of Witchcraft and Wizardry and battles the forces of evil. It’s likely she drew inspiration from not only her own house but from the ancient landscape and architecture that surrounded her.

Rowling went on to live in various places in England, Portugal and France before moving to Edinurgh in Scotland with the first three chapters of Harry Potter and the Philosopher’s Stone in her bag. She has lived their ever since, written all her subsequent books there, remarried and raised three children.

But her ties to Tutshill are strong, even though her strained relationship with her father and her mother’s diagnosis with Multiple Sclerosis when Jo was just 15 made her teenage years at Church Cottage difficult.

A number of Harry Potter characters are said to have been inspired by her school teachers, the flying car is the same model as a car owned by a school friend and, of course, the famous team who won the Quidditch League of Britain and Ireland five times is called the Tutshill Tornadoes.

And then last week, British media reported that J.K.Rowling had purchased her childhood home for £400,000 (approximately $AUD790,000). Apparently, this happened secretly back in 2011 but the ownership trail was only discovered as a result of extensive renovations under way at Church Cottage.

If you had the chance to buy back your childhood home, would you? What if it was a beautiful stone cottage on the edge of the Forest of Dean, surrounded by ancient history?