Ever since everyone’s favourite potions master, “Bonkers” Beth, first told me about Quizzic Alley, I have been dying to check it out. Life’s penchant for getting in the way of plans notwithstanding, it was only a matter of time before I jumped on the Murray’s Express to see the store for myself and holy moly was it worth the three-hour bus ride from Sydney.

It’s difficult to describe exactly what it’s like walking into Quizzic Alley for the first time, but there’s something about it that just ignites childlike wonder. I was personally drawn straight to the replica Ford Anglia sitting up the back since I always wanted to fly in it as a wee kidlet, but I think Quizzic Alley’s main calling card is how it can hold your attention after that initial surprise. Once you take your eyes off the car — which you can actually sit if you’re not too big to fold yourself into the front seat — the rest of the store starts to pop out and your inner child takes over.

To be entirely honest, I had to hold myself back a little inside Quizzic Alley; as a child, my family used to make fun of me for being entirely unable to sit still and hopping around the place when I was excited. So it was with a calm and collected attempt at grace that I wandered around the shop, not allowing the enthusiastic kid at heart to dash from corner to corner and play with everything he could get his dirty little bum scratchers on. From the giant dragon looping its way through the rafters to the little lolly corner, I can easily see why Quizzic Alley is such a popular destination in Canberra. 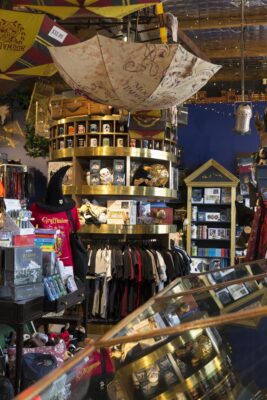 It took all of ten minutes for my wish list to spiral wildly out of control — and my budget, for that matter. My favourite thing was definitely the niffler hats because I love the idea of walking around with a weird platypus-mole-beaver thingy sitting on my head, but some of the pens and jewellery-type items were up there too. Admittedly, I steered clear of the school-style jumpers just because they reminded me of my old school uniform a little too much, but we’re not going to go into that here.

If you’re a Harry Potter fan you really MUST give Quizzic Alley a squiz(zic). Even if it’s just to sit down for a Q-Brew and a chat with friends, it’s a pretty damn cool and magical place to hang out.

Just a regular Muggle with a magical moustache.