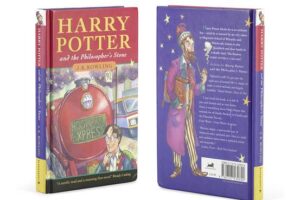 We’ve all seen the news headlines:

Copy of “Harry Potter and the Philosopher’s Stone” sells for $90,000

Upon reading these amazing headlines, Australians by the thousands deep dive into mum and dad’s garage looking for the copy they had as a kid. Friends are tagged, posts are shared and a seemingly endless number of first editions are uncovered.

“I am sitting on two first editions, just waiting for the price to go up.”

“I have that book. I had no idea it was worth that much.”

Of course, some books are long gone.

“I’m sorry love: I threw those books out long ago”.

“Did we keep our books? No, we must have given them away.”

“We should have kept them. Nnnoooooo.”

Well, in the interests of family harmony and to avoid mass disappointment, we have done the research for you and can tell you that it is highly likely that the book you covet (or lost or threw or gave away) is worthless. Yep, that’s what we said – WORTHLESS!

We’re so sorry to bring you such bad news but better now than later, right? Plus, you can reassure mum that she didn’t toss out the one thing that would secure your financial future. At least she’ll be happy!

So, the very first thing that we need to say and it will weed out 99% of those who think they may have a genuine first edition is this:

The only Harry Potter books worth significant money are UK first editions. Australian first editions just don’t cut it. News outlets don’t tell you that and here’s what happens:

So, why are these books basically worthless?

The first print run of “Harry Potter and the Philosopher’s Stone” in the UK was tiny. Just 500 copies – 350 trade hardcovers and 150 proof copies. Of those hardcovers, an estimated 350 went into the UK school library system, leaving a paultry 50 copies for the bookstores. Unless your copy survived the UK’s school population and somehow made it all the way to Australia or your clever mum bought your copy from a UK bookstore, you are all out of luck.

Publishers don’t waste their money on second and third print runs until they are sure a book will sell and they certainly don’t go printing books for distribution in other countries without big sales at home first. By the time Bloomsbury decided to take the gamble on printing an Australian edition of “Harry Potter and the Philosopher’s Stone” (dated 1997 but probably printed around 1999) “Harry Potter and the Chamber of Secrets” was hitting the shelves in the UK. You can guess how many copies of the first book they printed in Australia (hint: it wasn’t 500).

Now, don’t despair. True Australian first editions in good condition can be worth a few hundred dollars and first UK editions of the second and third books are quite collectable. Anything signed by J K Rowling could fetch a tidy sum. Take a look at Abe Books Harry Potter Collectors Guide to learn more.

So, still reading? Perhaps you have a true first edition of “Harry Potter and the Philosopher’s Stone.” Let’s find out… but first you must agree to let Quizzic Alley know before you tell anyone else. Pllleeeassseee! Just call us on (02) 61798856. Now, here’s the copyright page of the real thing. 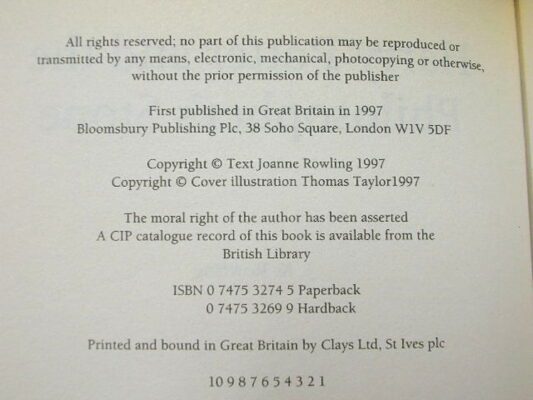 And a list of the issues you need to find: